Marudeen Aivaz is fiercely motivated by the joy as well as support of many like-minded people in his life. He has evolved his passion to not only suit his healthy lifestyle, but also enhance and discipline his routine. Marudeen has learned the value of choosing proper nutrition and consuming the right amount of nutrients in order to fuel the body. He does so with caution of course, as he understands the consequences of overindulging in unchecked calories.

As a California native, Marudeen was raised in a middle-eastern family. Growing up, fine dining and fitness were the family’s main focus in their free time. As a child, he was fortunate enough to always have food on the table and as a result, he quickly found himself to be larger in size than he had desired. However, he quickly discovered a way to discipline not just his eating habits, but also his exercise routine. In fact, he learned to control his meal portions and began dieting properly. Marudeen carefully measured the amount of calories he consumed as well as the quality of those calories. Furthermore, he learned to read lables when grocery shopping in order to consume foods that had the highest quality.

Throughout his life, Marudeen’s parents were both very active members of the gym community. They frequented the local gym on a regular basis. At the young age of fifteen, Marudeen would join his parents at the gym for his initial workout sessions. He quickly discovered his liking for weightlifting and it became a lifelong hobby of his. By the time he entered college, Marudeen Aivaz had a solid foundation of weight training, heavy lifting, as well as body building.

According to Marudeen, health and fitness are a lifelong journey. This statement has ringed true to not only himself, but everyone in his family. He believes combining proper nutrition as well as a disciplined workout routine is the key to living a healthy lifestyle. There are absolutely no shortcuts to achieving this goal and no pills can replace the hard work. 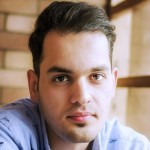 Situated in Long Beach, CA, Marudeen Aivaz was raised in a middle-eastern family. Growing up, fine dining and fitness were the family’s main focus in their free time.